Decolnialisation is described as the claim of a previously colonized people for independence and self-determination and also the collapse of colonialism. Decolonization came about by independence movements in colonized territories. 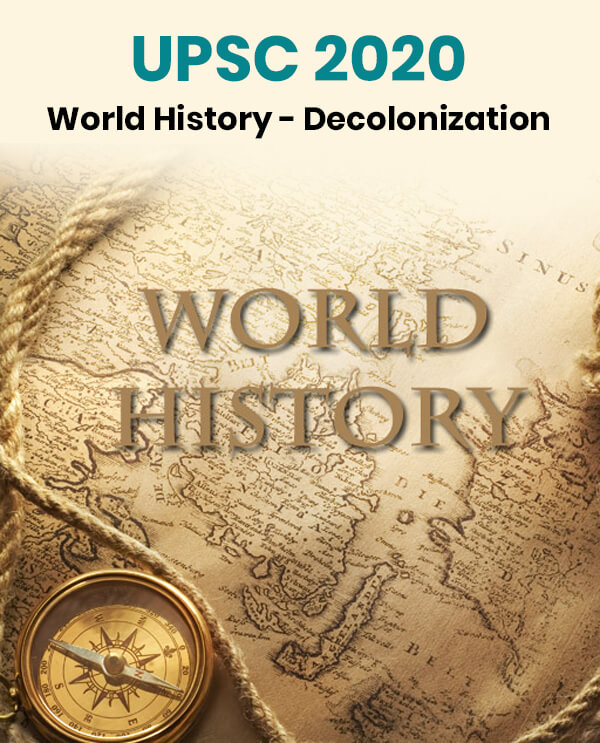 The colonial authorities also made an economic decision which also resulted in decolonization. The cost of maintaining colonial empires had begun to surpass their value for the European powers. Miis Lena Hussain sums it aptly “power is something out of the term”

There are many ways by which decolonization can occur. Most commonly, the dependency becomes a new independent state, a political entity recognized in the International field as independent of other states and as possessing final jurisdiction over a defined territory and population.

Less often, decolonization may occur through the dependency’s full incorporation into an existing polity, such that it is no longer separate or subordinate. For UPSC 2020, decolonization is a very important topic.

Historically it’s not clear when decolonization occurred. Puerto Rico’s relation to the United States can be defined as one of colonial dependency. In the 1960s, Portugal claimed to have no colonies, only foreign territories formally combined into a unitary Portuguese state.

There were three major elements that played a massive role in this Decolonization process. First was the colonized people’s hunger for independence, Secondly, it was the Second World War itself which established that colonial powers were no longer indestructible and thirdly was the new focus on anti-colonialism in the United Nations.

The French Revolution touched off a slave uprising that led finally to the independence of the French colony of Saint Domingue in Haiti. Please make sure to go through this portion properly as the UPSC 2020 syllabus consists of a lot of these topics.

The first period of decolonization was restricted to the Americans. In the twentieth-century, decolonization was global. It encompassed the freedom of most of the Indian Subcontinent, Southeast Asia and the Middle East, Africa, and the Caribbean.

After the Second World War, the major Asian colonies such as India, Indonesia, Indochina, and the Philippines gained independence. This change rapidly speeded during the 1960s which saw the decolonization of approximately all of Africa. In the decade of 1980s, nearly all the western colonies had become self-governing or had been fully integrated into sovereign states.

One important difference between the two periods of decolonization has to do with who sought independence. Early American decolonization was Creole revolutions, as the offspring of European settlers sought political independence from their mother country.

The American Revolution and the Spanish Wars for independence were political instead of social revolutions. Previous year UPSC questions have consisted of questions on decolonization

Decolonization has greatly affected the economies of the newly formed states. It was observed that newly independent African states had to improve an economic system. Furthermore, even though the previous colonies were new formally independent, they were still rather dependent on the west for support in developing economic and political structures. Therefore, western companies still had a significant amount of control over the new states.

The process of colonialism typically involved the relocation of the populace to a new terrain where the people lived as permanent settlers while maintaining political fidelity to their country of origin.

Colonialism is a practice of authority, which involves the suppression of one another. Decolonization is the opposing of colonialism.

1 strategy for UPSC 2020 examination is to solve the test series and past question papers. The UPSC 2020 calendar includes the important dates of the examination so do keep yourself updated.