As we near Republic day and the upcoming budget, economic growth figures and outlook remain gloomy for the nation. In today’s news, pick up cues of the IMF forecast for India for 2020, the creation of three capital cities for Andhra Pradesh and the Supreme court’s indirect nod for the controversial poll bond scheme.

Also, watch out for developments in the Nirbhaya rape case and Pakistan’s plea to be excused from the FATF list. 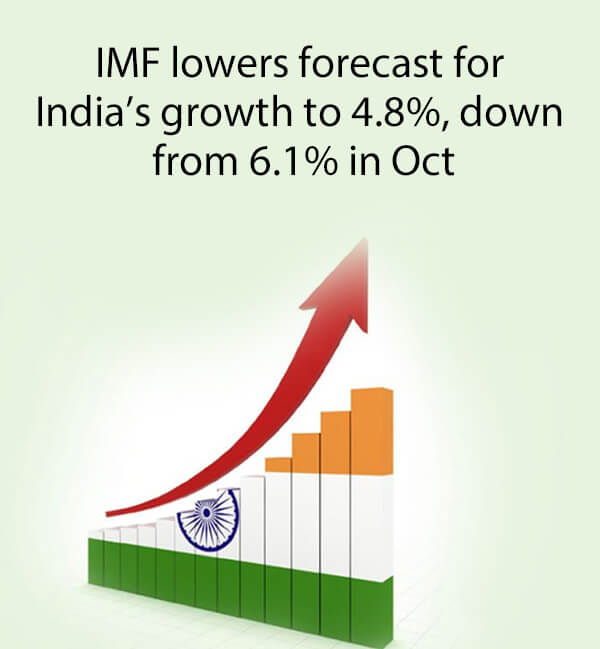 The slow economic growth numbers for India were validated by the International Monetary Fund (IMF), when it lowered the growth forecast for the current fiscal year to 4.8%. The IMF had earlier projected India’s growth for the year at 6.1%.

Lower than expected GDP (Gross Domestic Product) numbers have led to this fall.

The current government has been criticised for weak economic growth since demonetisation. Since July-September 2019, the country’s economy has grown by 4.5% - its weakest performance in six years.

Fall in rural demand growth and overall credit sluggishness are the two reasons the IMF cited for this reduced outlook. However, the Fund remained optimistic. Gita Gopinath, IMF’s Chief Economist said that the growth momentum should improve next year, particularly after reduction in corporate tax rates. 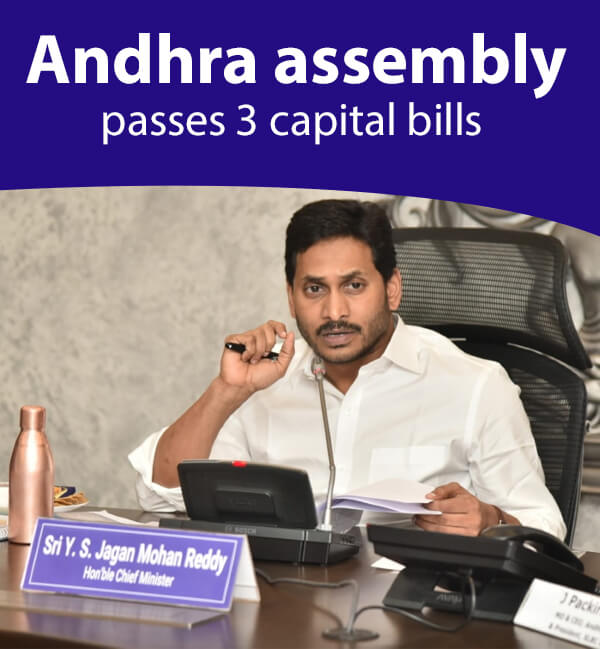 The Andhra Pradesh assembly has passed a bill to develop 3 capital cities for the state, a dream project envisaged by CM YS Jagan Mohan Reddy. The decision was taken after a marathon 12-hour long sitting session of the AP assembly, with fierce debates from both sides.

The three capitals concept is to create three decentralised centres for government - Amravati as the legislative centre, Vishakhapatnam as the executive /administrative centre and Kurnool as the judicial centre.

The bill ‘Decentralization and Inclusive Development for All Regions’ covers creation of three capital cities (Vishakhapatnam and Kurnool alongside Amravati) and development for the same. A Central Region Development Authority (CRDA) bill was also passed, to repeal the earlier CRDA act from 2015, which had been set up to develop Amravati.

CM Reddy holds the addition of two capital cities as a way to do justice to other regions. 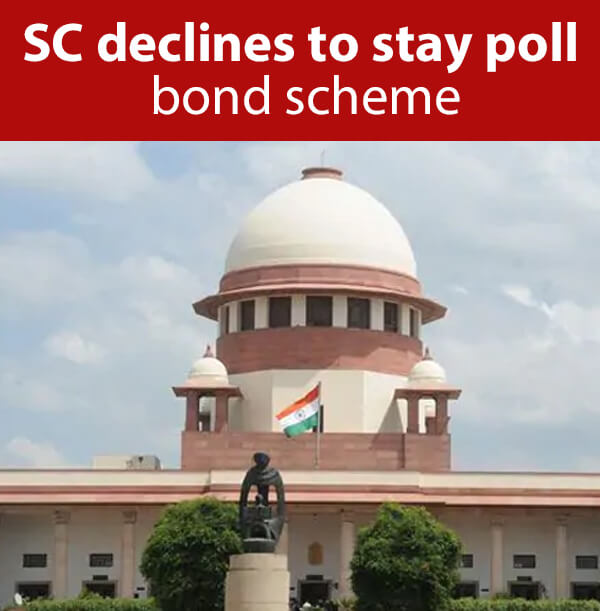 The Supreme Court has declined to stay the electoral bonds scheme when the matter was brought to it again. Chief Justice of India (CJI) Sharad A Bobde has said that if the Court had found it uneccesary to put a stay on the scheme earlier, it won’t do so now.

The move, which can be considered a nod to the controversial scheme, overrules the strong objections both RBI (Reserve Bank of India) and EC (Election Commission) had highlighted against it.

The electoral bonds scheme allows citizens and companies alike to donate to their favoured political parties, by purchasing interest-free bonds (akin to bank notes) from 29 select branches of State Bank of India. These bonds can be purchased digitally or through cheques.

These bonds are issued in multiples of 1000s - 1k, 10k, 1 lakh and 1 crore. They can be encashed by the party and the money added to the party’s verified account. The bonds have been criticised as a way to siphon black money funds into political parties as the latter do not need to disclose the identity of the donor.

This will also hide the extent of a political party’s coffers from voters and the public at large. It may lead to rigged elections and the use of money muscle to win votes.

Petitioners had been arguing over instances of the bonds being used to add funds to the ruling party, ahead of polls in Delhi. The new petition asked SC to re-look at the earlier stay as many disturbing facts had since come to light. The Election Commission had also objected to the scheme, as a way of bringing in benami funds to political parties.

On April 12, SC had ordered all political parties to give EC the details of all of their donors and the contributions they had received from them through electoral bonds. 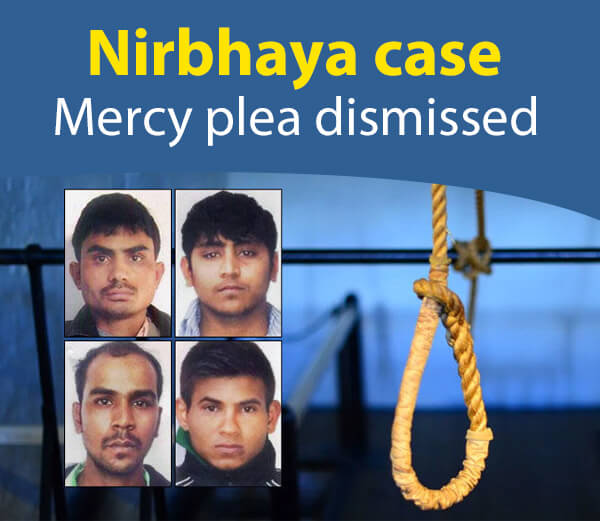 The Supreme Court has dismissed the mercy plea of one of the convicts in the Nirbhaya case, who claimed that he was a minor when the crime was committed. Pawan Kumar Gupta, due for a death sentence, had filed a special leave petition. The Court dismissed this, saying there was no fresh ground in the matter.

Pawan Kumar Gupta, a convict in the brutal murder and rape of a 23-year-old medical student had filed for a mercy petition, ahead of his January 22 death sentence (which had been deferred to Feb 1). Fresh death warrants have already been issued against the convicts in the case.

The Supreme Court has already said that it is a fit case for death sentence as it’s the rarest of the rare case.

The case had shocked India due to its barbaric nature, leading to a demand for capital punishment for all rape convicts and stricter laws for punishment of rapes. The case has been used as an example for all heinous rape cases since 2012.

Pakistan urges US to get it off FATF grey list 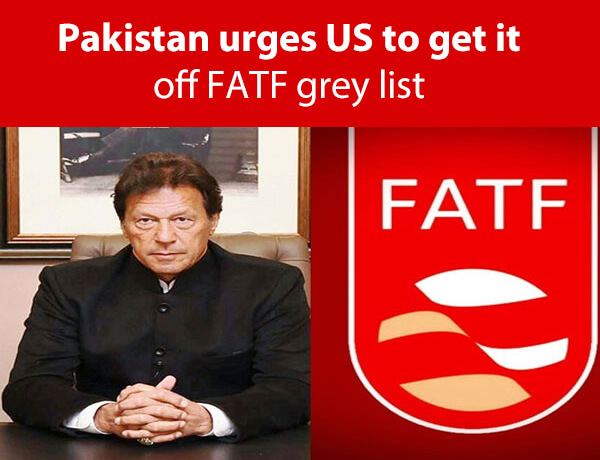 Pakistan has urged US government to remove it from the grey list of the Financial Action Task Force (FATF). The FATF monitors countries accused of terror funding and financing, along with global money laundering.

Pakistan had been placed in this list as it has failed to stop money laundering within its territorial region for terrorist activities.

Pakistan will be meeting its ally, China in an upcoming meeting in Beijing and hopes to gain support for this demand during this meeting. The meeting will lead to a stronger position for the country, in the FATF plenary meeting ahead in Paris.

The FATF plenary meeting in Paris will see all participating countries gather to decide whether Pakistan can be removed from the list or not.

If Pakistan remains on the grey list by April, its position would be escalated to the blacklist. Countries on the FATF blacklist face severe economic sanctions for their role in promoting terrorism and money laundering. Iran, for instance, is on the black list.

Pakistan is also expected to engage with US through multiple channels in order to remove itself from this list.