Supreme Court refuses to stay CAA without hearing the govt. 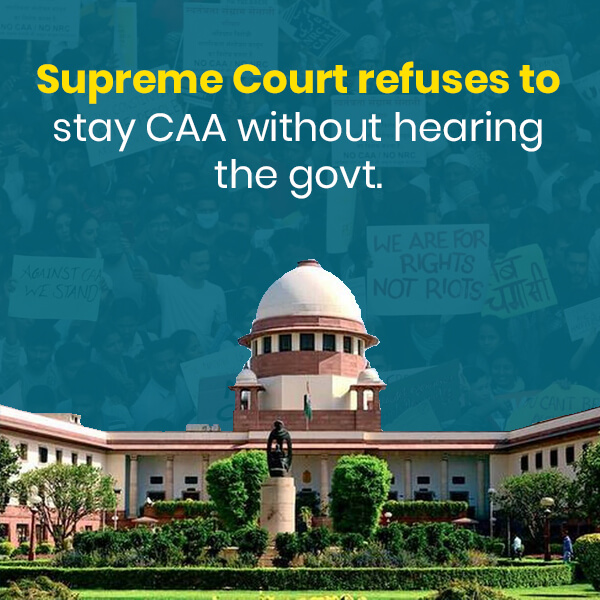 the centre’s take on it. The orders came after the apex court dismissed a plea that sought CAA to be declared constitutional.

SC has refused to put stay on CAA despite the matter being so much controversial with so many different views. The Court said it first wants to hear the centre’s response on the pleas challenging the act. It also stopped all high courts from passing any orders on CAA.

A team of 3 bench officials have granted the government 4 weeks to file its reply. The cases related to Tripura and Assam on this matter would be heard separately. The court was hearing more than 140 petitions on CAA.

There have been multiple nationwide protests against the CAA, ever since it became a law on Dec 11, 2019. Three states - Punjab, Rajasthan and Kerala are already opposing the act. The point to consider here is that all three are non BJP ruled states.

Presidential orders under Article 370 has no relevance 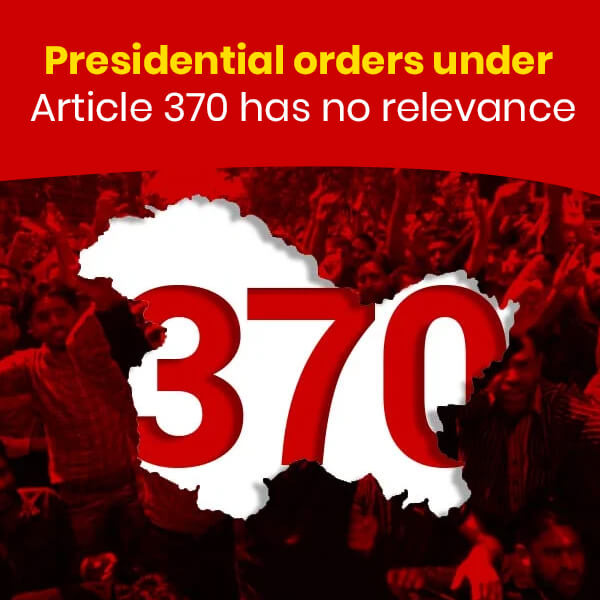 In a plea to the Supreme Court, People’s Union for Civil Liberties (PUCL) has argued that the presidential order notifying the abrogation of Article 370 and the creation of a Union Territory of Jammu and Kashmir is not relevant as the provision had already ended in 1957.

On August 5, 2019 the Centre had announced doing away with Article 370 and dividing the state of Jammu and Kashmir into a union territory for J&K and Leh. The state has been under controlled communication censorship and curfew for more than 5 months, disrupting mobile and internet access. Many leaders have also been imprisoned.

PUCL senior advocate Sanjay Parikh submitted the plea, saying that Supreme Court stating that to change the governance and the identity of Jammu and Kashmir, the centre need not have notified a presidential order under Article 370 of the constitution separately.

The Constitution of Jammu and Kashmir was adopted on November 17, 1956 and its assembly dissolved on January 26, 1957.The purpose of temporary provision of the recently abrogated Article 370 ended there only.

relationship between J&K and Union of India. The purpose for which the Article 370 was formed itself got ended with the framing of its constitution and dissolution of constituent Assembly of Jammu and Kashmir. 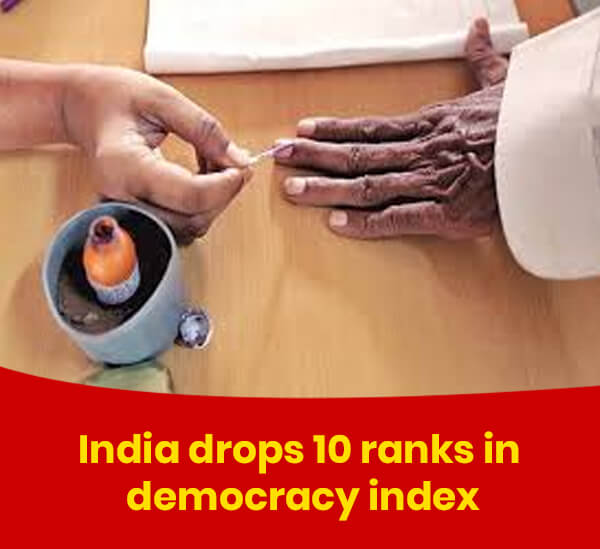 India dropped to 51st rank on the global Democracy Index, a drop by 10 places. ‘Democratic regression’ and ‘ erosion of civil liberties’ were cited as the reasons behind the drop on the report published by The Economist Intelligence Unit. The total list has 165 independent states and two territories.

In Asia, India ranks 8th, behind Taiwan. The curfew after Article 370, clampdown after CAA and other forms of clampdowns have not helped its performance. 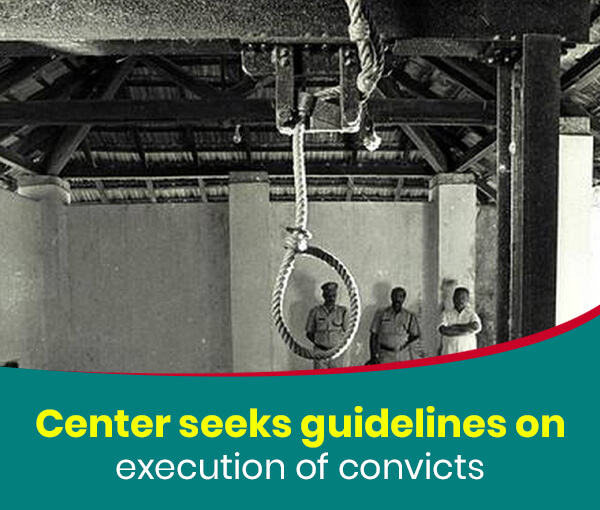 The Center has petitioned the Supreme Court to fix a deadline of seven days to execute the death penalty of condemned convicts after a black warrant is issued. This move has come after multiple delays in the execution of the four convicts in the Nirbhaya gangrape and murder case.

The convicts in the Nirbhaya gangrape and murder case were issued black warrants and sentenced to be hanged on Jan 22. This had happened after all due processes of law and presidential assent. However, the decision was delayed after one of the convicts filed a mercy plea.

The current system observes a 14-day cooldown between one black warrant and the next, in case it is challenged with a mercy plea. The hanging was deferred to Feb 1, while the mercy plea was dismissed by the Court.

The government has said that the need of the hour is to frame guidelines which are in ‘the interest of victims’ rather than convicts. The direction sought by Ministry of Home Affairs (MHA) will “mandate all competent courts, state governments, prison authorities in country to issue death warrant of a convict within seven days of rejection of his mercy petition to execute death sentence within 7 days thereafter irrespective of stage of review petition/curative petition/mercy petition of his co-convicts.

US President warns of trade war against EU nations

US President Donald Trump has warned of a major trade offensive if the EU fails to agree over a long-delayed trade deal. Trump said this on the second day of the Davos Economic Forum, warning specifically of severe auto tariffs.

Trade relations between EU and US have progressively declined since Trump came to power three years ago. It began with tariffs on steel and aluminium imports to US, which came from EU. The EU had retaliated with taxing iconic US products.

A trade deal was in the works in July 2017, but got stalled.

Trump’s statement comes after the EU had made plans to go ahead with digital tariffs that would impact US firms. The president had said that US would protect its own interests. He also called speakers ‘Prophets of Doom’ on Day 1, when they had tried to project global warming as a worldwide crisis.

Pak seeks UN, US help to resolve conflict with India 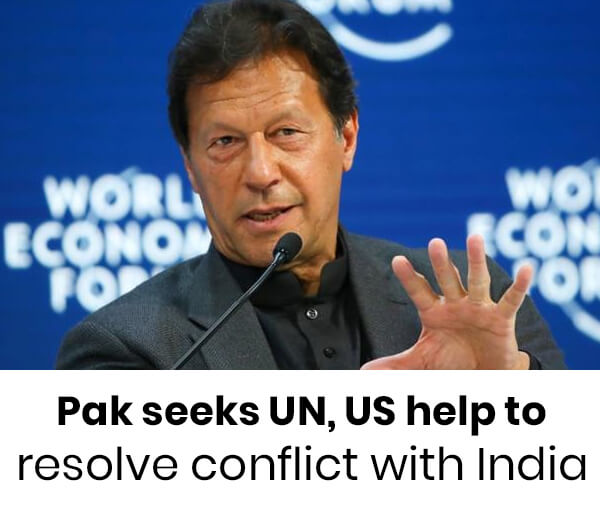 Pakistan PM Imran Khan urged UN, US to help the country de-escalate their tensions with neighbour India at the World Economic Forum in Davos. He said they must act to prevent the two nuclear countries from reaching a point of no return.

Khan said India may attempt to raise border tensions to divert attention from its current domestic situations, especially those in Kashmir. He also requested world leaders at the global summit to allow a UN military observer group at the Line of Control between the two nations.

India maintains that the UNMOGIP, established in January 1949, has outlived its utility and is irrelevant after the Shimla Agreement and the consequent establishment of the LoC.