The Aam Aadmi Party, led by Arvind kejriwal had almost replicated its fairytale victory of 2015 by winning 62 seats in the 70-member assembly for Delhi, during the recently concluded Delhi elections. 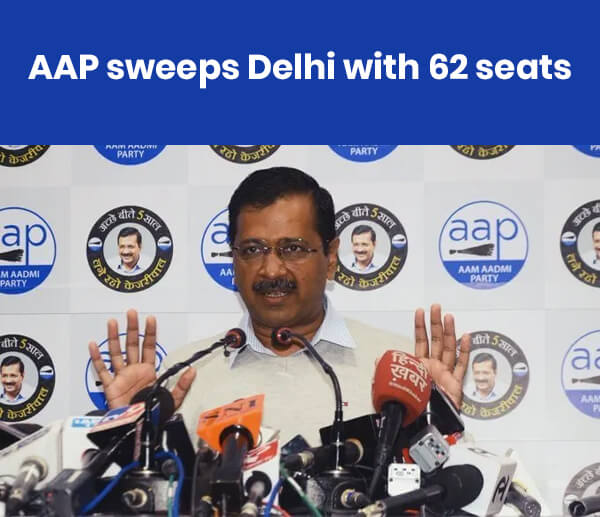 The incumbent government won on his development agenda and the work done in the capital in the last five years.

In an almost a clean sweep, AAP led by Arvind kejriwal reduced opposing parties BJP and Congress to single-digit representation in the state assembly. BJP could only win the remaining 8 seats while Congress was not able to get even a single seat.

The AAP victory comes 8 months after the Lok Sabha polls, where the party had not been able to pick a single seat in the state. At that time, BJP had aclean sweep by winning all 7 seats.

In the assembly polls, however, BJP failed to make any impact in constituencies where its leaders even made controversial remarks against the state’s ruling party. In fact, out of 12 constituencies where UP CM Yogi Adityanath had campaigned for the BJP, the party was able to grasp only three.

The Congress, on the other hand, touched a record low, as the party bagged less than 5% of the total votes.

US officials have confirmed US President Donald Trump's visit to India on 24th and 25th of February. He had received an invitation to come to our country from Prime Minister Narendra Modi, when he had gone to the country in June. 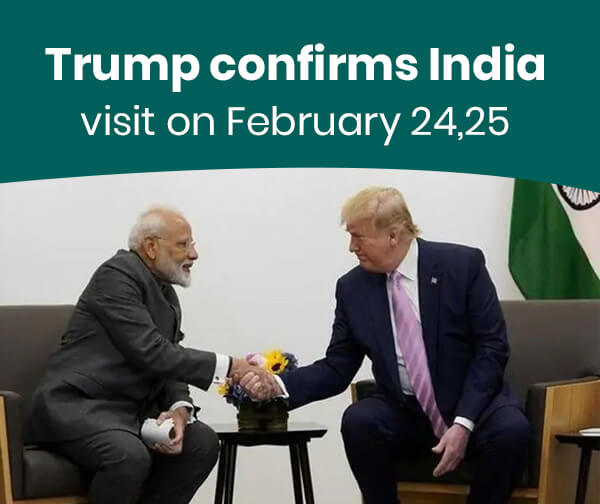 The trip is expected to deepen the defence cooperation between the two countries. They are also expected to sign a trade pact.

Trump will be the 4th consecutive US president to visit India after Clinton's trip in 2000.Bill Clinton's successor ,George W.Bush visited once in 2006 while Trump's predecessor Barack Obama visited twice in 2010 and 2015.

The visits of US presidents till now have proven how far the ties have strengthened between the two countries which had once lacked warmth in their ties.India was once seen on the side of soviet union during the cold war years while the US was a close ally of Pakistan.

Trump's visit has raised hopes that both the countries will work out a trade deal that will lessen India's trade surplus with the US.The surplus was once $30 billion in favour has narrowed now to $16 billion.Bilateral trade in 2018 stood at an estimated $142.1 billion.

Ahead of this visit,India is expected to approve a $2.6 billion deal for military helicopters from the US defence contractor Lockheed Martin corp.India's cabinet committee on security is likely to clear an order for 24 MH-60R Seahawk helicopters for the Indian Navy in the days ahead. The helicopters are expected to be bought under a government to government deal through US foreign military sales route.

We also expect a public meeting along the lines of the 'Howdy Modi' event which had occurred during Modi’s American trip in September last year. Held in Houston, this event saw participation from about 50,000 people.

Four members of the Chinese military have been charged with breaking into Equifax networks and stealing the personal information of tens and thousands of million people.while Beijing has hit back in the military spy row and has accused Washington of organised and indiscriminate cyber stealing and spying. 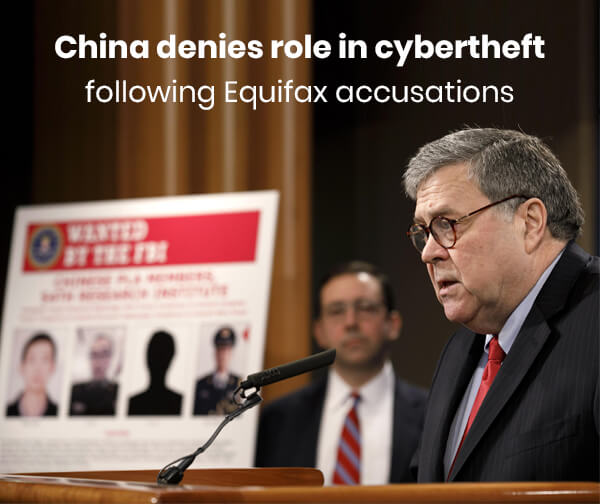 China has denied involvement in any hacking activities after the US indicated that 4 members if the chinese military for breaking unethically in to personal information of millions of people.The Justice department accused Beijing of engineering one of the biggest hacks in the history of world wherein the equifax credit report of millions of consumer has been hacked.

The foreign minister of China Geng Shuan also turned the accusation back on U S saying that the past events have shown that US has been engaged in the large scale organised and indiscriminate cyber stealing, spying and surveillance activities on foreign governments and individuals.

The four accused - Wu Zhiyong, Wang Qian, Xu Ke and Liu Lei - are members of the People's Liberation Army, which is an arm of the Chinese military.The criminal charges have been filed in Federal court in Atlanta where the company Equifax is based.According to the indictment,the 4 member of the people liberation Army exploited the Apache struts web framework software used by Equifax's online dispute portal.

A whopping amount of gold 355 kg whose market value is somewhere close to Rs 123 crore was seized from hundreds of passengers at Chennai airport last year. Its almost a 53% increase in its seizure as compared to the previous year. 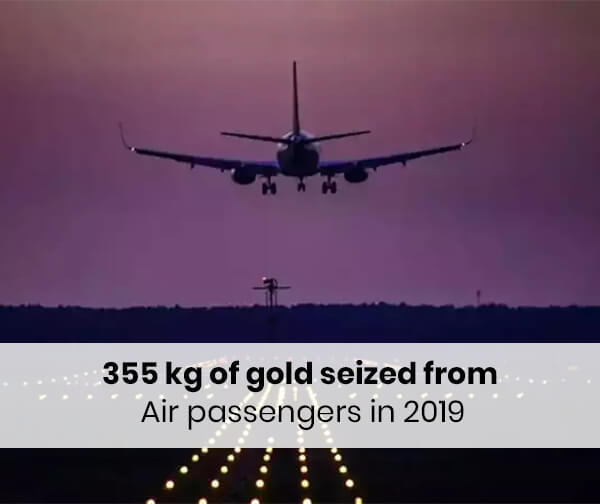 According to the commissioner of customs at Chennai airport,Rajan Chaudhary,most of the passengers come from destinations like Singapore, Malaysia and Srilanka.

Before this,most of the passengers would smuggle the gold from the Middle East but these days it's coming from Srilanka, Singapore and Malaysia.people have been concealing goods in their MP3 players to skateboards,door latches and even their rectum.

The biggest case till now has been that of 2019 when the korean passengers from Hong Kong concealed gold inside their shorts.After seizing the gold and foreign currency,they are sent to Reserve Bank of India after certain amount of time.The upper limit of carrying a gold is no more than that of Rs 20 lakhs.If any passenger carries above this then the gold is seized and passenger is arrested too.

After the suspension of the execution of the convicts in the Nirbhaya gangrape and murder case, scheduled for Feb 1, the Supreme Court has allowed the centre and Delhi government to seek fresh execution dates. 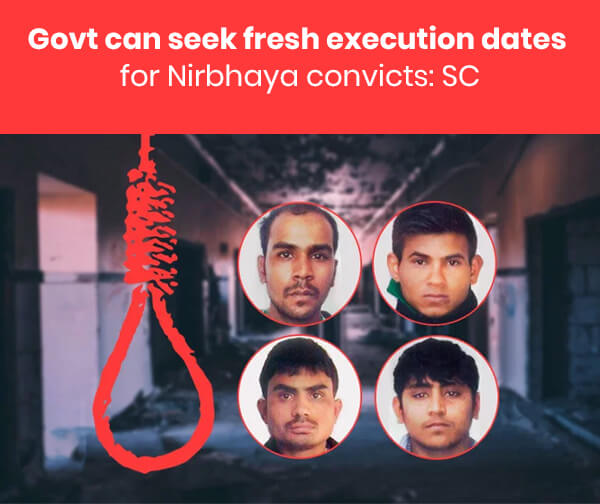 On February 5, the high court gave the convicts one weeks time to exhaust their legal remedies and also rejected the government's prayer to allow them to be hanged separately.

The Supreme Court has given green signal to centre and Delhi government both to seek fresh dates for the execution of December 16 convicts of rape and murder.

In a development related to the case, convict Vinay had approached the SC against the rejection of his mercy plea by the President claiming that he suffered brutal forms of physical and mental torture.The parents of the victim and Delhi government have appraoched the court to issue the fresh dates for the brutal murder and rape of their 23-year-old.

The heinous crime took place in the night of 16 december where 6 men raped and murdered a 23 year old paramedical student.The girl later died while getting the treatment in Singapore.whole of the nation was shocked on this kind of brutality of mankind.

6. Implementation of skill India policy at odds with political economy

The implementation of skill India policy has not sufficiently shown the reality of India's political economy.

According to the researchers, skill training activities that are taking place right now, are pushing the young and needy into informal and low paying jobs. These are unlikely to lead them to a better economic future or make their lives any better. 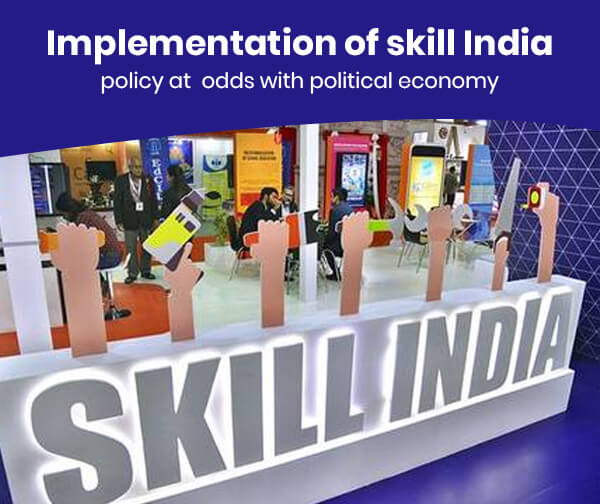 A research was done to look into the training and employment scenario of young and unemployed people of the country wherein it was found that they are into the precarious and informalised low paying jobs.This can hinder their social economic growth.The greater attention is being put to relevance of skills to local job markets which can make the skill training more useful for workers.A great focus and attention is needed on the aspect of nature of job being available.

To boost the skill India mission, the government had already set aside Rs 17,000 crore in 2018 for skilling, employment generation and providing livelihood to millions of people who enter the workforce every year.

Every year at least 10 million young people enter the country's workforce but the job creation in India has not been in pace with this influx making rising unemployment a great challenge for the government.