A three-judge SC bench has reprimanded telecom majors like Bharti Airtel and Vodafone Idea over why they have not paid their adjusted gross revenue (AGR dues), even though it issued an order to them to do so on October 19. The court has threatened them with contempt proceedings and also issued a show-cause notice to the Department of Telecommunications for a letter they had issued, which ‘stayed’ the court judgement. 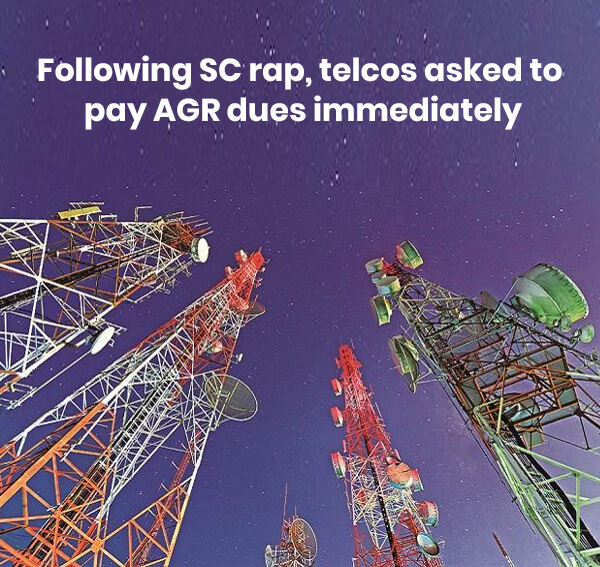 In 2005, telecom firms had first contested the government imposition of adjusted gross revenues or AGRs. The government had held that AGR should include revenue earned from all avenues, while the telecos wanted it to focus only on revenue for their core services.

In 2015, the Telecom Disputes Settlement and Appellete Tribunal held the companies’ definition as the correct one. However, this judgement was put aside by the Supreme Court on Oct 24, 2019, when it agreed with the government. It has also directed the firms to pay Rs 1.47 lakh crore as pending dues.

If these dues are not paid by the next hearing on March 17, the court will meet the company heads in person on that date.

2. European Union calls for swift end to all curbs in kashmir

After a 25-member delegation of the European Union held a two-day visit to Kashmir, to judge the situation on the ground, the EU Ambassador to India, Ugo Austoto spoke on the matter. The delegates have confirmed that India has taken steps to bring normalcy in the state, but not removed all curbs in Kashmir. 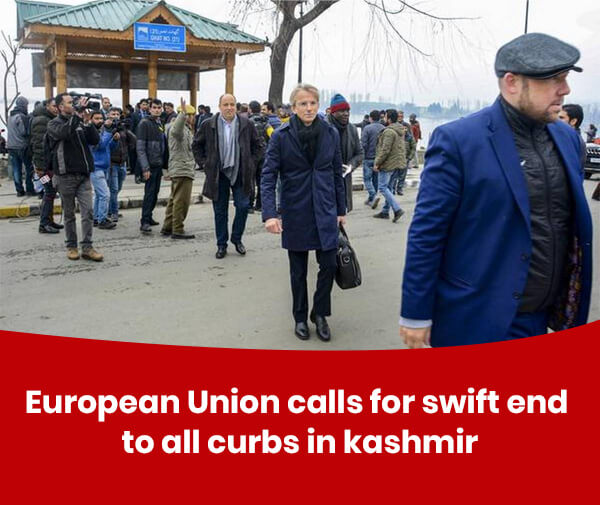 Spokeswoman Austoto said that here is no doubt that India has taken immense steps to bring normalcy in the state but still there are few more curbs that needs to be completely removed now. These restrictions include those on internet access and mobile services, alongside detention of some political leaders due to security concerns.The delegates want these restrictions to be lifted swiftly.

She had headed the 25-member delegation which recently went on a two-day visit to the state between Feb 12 and 13.

The envoys had a meeting with India's National security advisor Ajit Doval.

India had extended an invitation to the European Union to visit the valley on Feb 12 and 13 and their statement comes ahead of their meeting with Ajit Doval.

India has imposed restrictions on internet and detention of few political leaders because of security concerns after the abrogation of Article 370 and 35 A in the State.The state was then merged with the rest of the country and was split into two Union territories Jammu and Kashmir and Ladakh that are now governed and administered directly by the central government.

The US has denied entry to Sri Lankan Army Chief Shavendra Silva over evidence of human rights violations against Tamils in the 2009 finale of the LTTE-Sri Lanka civil war. 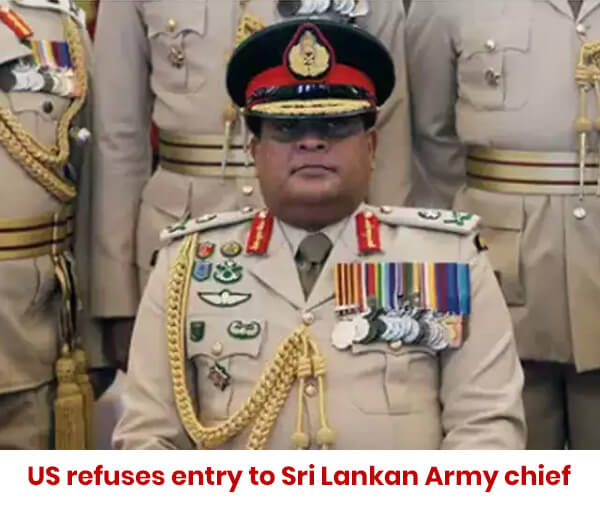 Sri Lankan Army chief lieutenant General Shavendra Silva’s appointment had drawn international criticism over claims of human rights violations in the 2009 offensive against LTTE. He was the commanding officer of an army division in the island’s northern war zone in a military offensive against the Tamil Tiger rebels in 2009.

Human rights activists say that some 40,000 ethnic Tamils were killed in the mass atrocities as the government seized Tamil dominated north area of Sri Lanka.

According to reports from the United Nations, Silva had played a major role in the war crimes against Tamils.The 2009 operations gave a big blow to Tamil tigers who were fighting since four decades for a separate homeland.The operation killed near about 1,00,000 people and was characterized by rebel suicide attacks.

US Secretary Mike Pompeo said that Army chief as well as his immediate family members will beineligible to visit their country. Pompeo also said that the United States hopes to maintain securitycooperation with Sri Lanka,which was rocked by bombs by Islamist extremists last year on the eve of Easter.

The Supreme Court has issued a notice to Jammu and Kashmir administration seeking validity of the detention centre where ex-CM Omar Abdullah has been placed over the last six months. A two-judge bench which is hearing a plea filed by Abdullah’s sister Sara, has directed the authorities to file their reply by March 2. 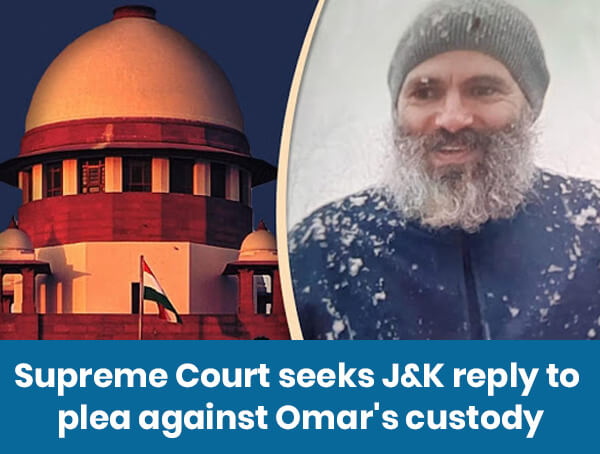 Sara has challenged her brother’s custody under Jammu and Kashmir’s Public Safety Act. She has called the February 6 order under PSA as unconstitutional and a flagrant violation of fundamental rights.

The National Conference leader has been under detention since August 5 last year, when the centre abrogated Article 370 and merged the state with the central administration. It also split the state into two union territories ,one Ladakh and another Jammu and kashmir.He was again booked under the PSA on the night of February 6,just few hours before his detention was about to end.

Another J&K leader Shah Fasal was also booked under PSA on the day after SC heard Omar Abdullah's detention case. The case hearing was due on February 13, but was advanced by a day as Abdullah’s counsel Kapil Sibal, was not available on the day.

Citing a significant improvement in the capital area’s air quality, the Supreme Court lifted an order which banned all construction and demolition activities in Delhi-NCR for the last three months. They said that the ban had served its purpose. 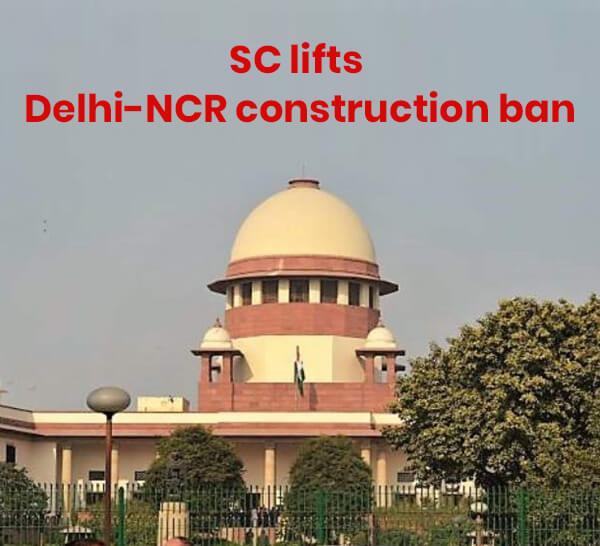 The ban had earlier been partially eased on December 9, when the court had allowed incomplete construction activities to resume during the day.

The court held its current decision on an affidavit it received from the Central Pollution Control Board that air quality was less toxic this month, than the last month.

The Defence ministry is working on a formal structure for the new Department of Military Affairs (DMA), which will be headed by the recently appointed Chief of Defence Staff (CDS), General Bipin Rawat. It will include both civil and defence personnel. 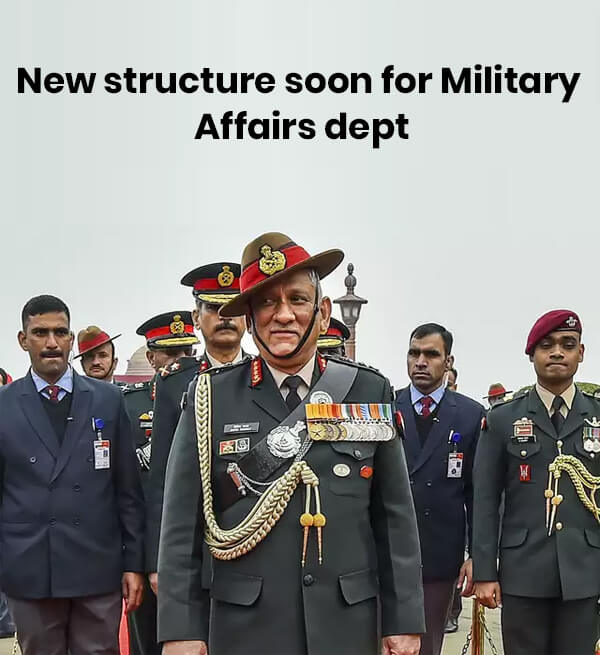 Rawat’s spokesperson Major General Mukesh Agarwal also announced that the CDS will prioritised procurement cases from the next meeting of the Defence Acquisition Council (DAC).

Currently the department is running on an unapproved, interim structure, which means they have no financial powers. All matters around financial approvals are coming to the Secretary, DMA.

The new model structure is based on the different models which exist at the Ministry of External Affairs, the Indian Space Research Organisation (ISRO) and the Defence Research and Development Organisation.

In a press release, the Ministry of Commerce and Industry said that India’s overall exports for merchandise and services are estimated at $446.46 billion with a positive growth of 1.94% vis a vis last year.

The Ministry of Commerce and Industry released a January review of wholesale prices in India, with the Wholesale Price Index for all commodities (base-year 2011-12). These figures have risen by 0.1% to 122.9 points vis a vis the numbers for December.

The annual inflation rate stands at 3.1% provisional for the month of January 2020, rising from 2.59% for December.

There was a change of command held at sea for the naval Western Fleet on Feb 14, onboard the INS Vikramaditya. The outgoing commander Rear Admiral Sanjay Jasjit Singh handed over the baton of the flag officer commanding to the new commander, Rear Admiral Krishna D Swaminathan.

The Ministry of Shipping has signed two agreements between India and Portugal around ports and maritime transport on Feb 14. These agreements seek coorperation between the two countries on operations for their merchant fleets and the creation of world class National Maritime Heritage complex in Lothal, Gujarat.

These agreements are being inked on the sidelines of Portugese President Marcelo Rebelo De Sousa’s four day state visit to India.