Indian and Russian companies have signed 14 MoUs for joint ventures in the defence space, on the sidelines of the 5th India Russia military industry conference at Defexpo 2020 in Lucknow. These deals will include a range of military equipment, including modern T-90 tanks and the Pechora air defence systems. 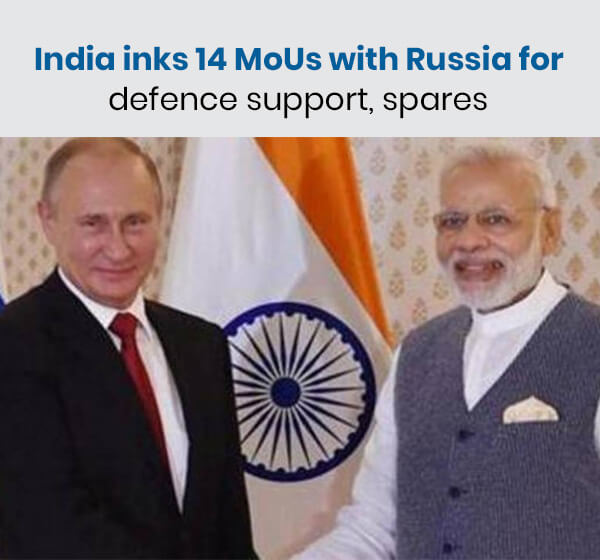 These agreements were signed under the Intergovernmental Agreement (IGA), which covers joint manufacturing of military spares in India. This agreement was signed in September 2019 and covers creation of spares, aggregates and parts for Russian or Soviet-origin arms and defence equipment.

The idea behind these deals are to address lack of timely spares and technical support for Russian defence hardware used by the military.

The union government’s National e-Governance Service Delivery Assessment (NeSDA) 2019 report has scored different states and union territories on e-governance delivery. The first such report of its kind has ranked Kerala on top, while tech-hub Andhra Pradesh lags at number 13. 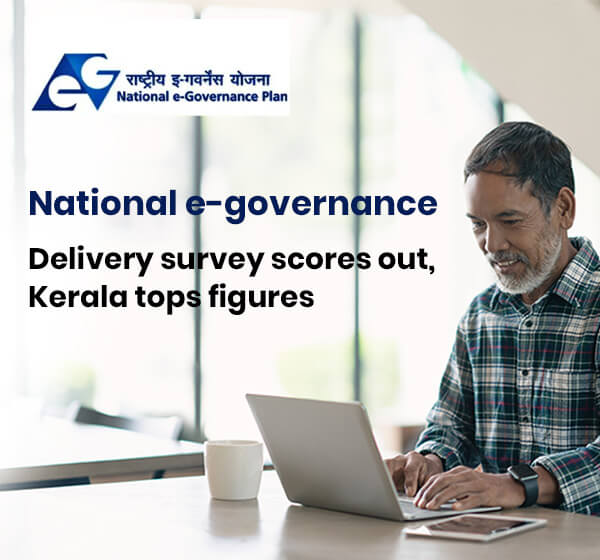 Tamil Nadu remains at the bottom of the list.

The report’s assessment wishes to take stock of current situation and aims to improve overall e-government development. It does not include all states and UTs on one axis - reports for 17-18 states were published together, while Union Territories, northeast states and hill states got their different data set.

Among portals, Andhra Pradesh scored 0.48 on a scale of one, standing on the 13th position. Andhra currently deliver over 51,000 e-services, the highest in the country, as stated in the same report. The state even lags behind six north-eastern states.

Identification of new cases of the Coronavirus epidemic in China has declined for the third consecutive day to 139. This slowdown may be a result of China’s efforts to control the spread of the epidemic, though WHO has warned that it is impossible to predict the outbreak of the disease. 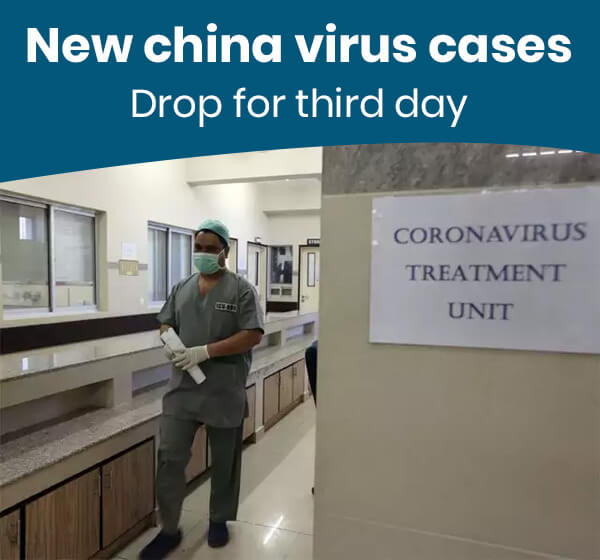 Even as the first coronavirus death was reported outside Asia, in France, the number of new cases of nCoV victims seems to be on the decline in China. Global concerns on the spread of the disease have peaked as 68,000 people have been infected globally by the disease and China has now recorded 1,665 deaths.

Hubei, the province most impacted by the spread of the killer infection, has seen the number of new cases on the decline. Other parts in China have also reported a decline in cases. This decline is being seen as an indication that China is making huge efforts to control the disease.

Chinese authorities have put some 56 million people under quarantine in its Hubei province and its capital Wuhan .This has been done to virtually stop the spread of epidemic in the other parts of the country.

The biggest cluster of patients infected with the nCov virus are quarantined on a Japanese luxury cruise ship, which is currently marooned outside Japan.

Meanwhile, an 80-year-old Chinese tourist has died in France, marking the fourth death outside China. The other three deaths occurred in Philippines, Hong Kong and Japan.

4.Multiple rockets hit US coalition base in Baghdad

An Iraqi military base in Baghdad, which was being used by the US as a military base for its operation, has been hit by several small rockets. The base was located inside Baghdad's fortified green zone. 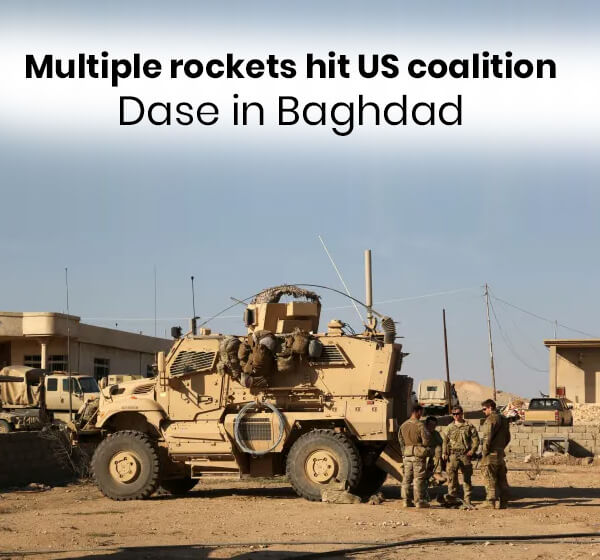 The Baghdadi military base was hit by a number of rockets targeting the US embassy and its surroundings. Though there were no casualties reported, US and Iraq have gone on high alert after the attack. US has blamed Irani paramilitary forces for the attack.

Before this incident, there was an attack on the US embassy compound in January. There was also a rocket attack on a northern military base in December, which killed a US civilian contractor. No one has claimed responsibility for these attacks.

Tensions between Iran and US have escalated since the current American administration under Donald Trump assassinated Irani army chief Qassem Soleimani in a drone strike early January. The Iranian regime announced that it would retaliate against the move. They have launched offensives against US by attacking US bases in their neighbouring country, Iraq.

In the most recent attack, three Katyusha rockets had hit the fortified green zone which hosts the US embassy, other foreign missions and Iraqi government buildings.The fourth strike was near a logistic base for Iraqi paramilitary groups.

With all these incidents, Iraq has been caught in between its two allies Washington and Tehran. Iraq also facing domestic crisis as months of anti-government unrest continues.

5.COVID-19: India reaches out to China in aid and support

India will soon send a consignment of medical supplies to China to combat the deadly coronavirus attack which has claimed 1,665 lives till now. Indian ambassador Vikram Misri expressed solidarity with the people of China in fighting against the epidemic.

In one of the concrete steps to tackle the outbreak of the epidemic in china, India is ready to help and assist the people of china in their difficult time by extending medical help to its neighbouring country. India will send its first medical consignment batch as soon as the requirements that have been listed out by China are finalised.

In a goodwill measure, India has also lifted the ban and cleared some of the medical equipment

ordered by Chinese importers to meet the requirements.

China needs the gloves, N95 masks and the protective suits for the medical staff especially attending the virus hit patients. Masks have gone short in china as their demand has increased manifold with the spread of the epidemic in the past three weeks.

On February 9,Prime Minister Narendra Modi wrote to Chinese president Xi Jinping offering India's assistance to china to deal with the Coronavirus outbreak. China has appreciated India's goodwill gesture and true friendship at the hour of crisis in the country.

The 47th Squadron of the Indian Air Force, currently stationed at Adampur has completed 60 years of its service to the nation. It celebrated its diamond jubilee celebrations with an aerial display at Air Force Station Adampur. 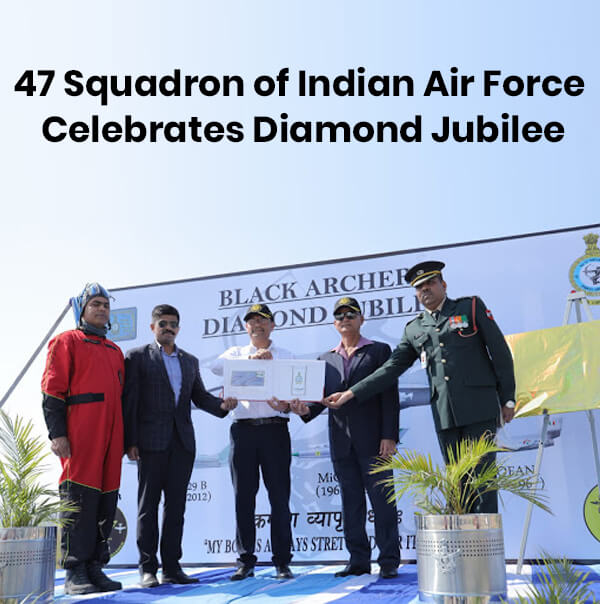 The 47th Squadron celebrated its diamond jubilee with an aerial display by the Surya Kiran Aerobatics Team, IAF vintage Flight, Air Devils and performance by the Air Warriors Drill Team enthralled the audience. A large number of serving officers, dignitaries and veterans were part of the celebrations.

The squadron is known for operating Toofani, MiG-21 FL and MiG-29 fighter aircraft. It took part in both the 1965 and 1971 Indo-Pak wars and has won many honours. It has also participated in Op Safed Sagar, Op Parakram and the operations post Balakot Strike in Northern sector. 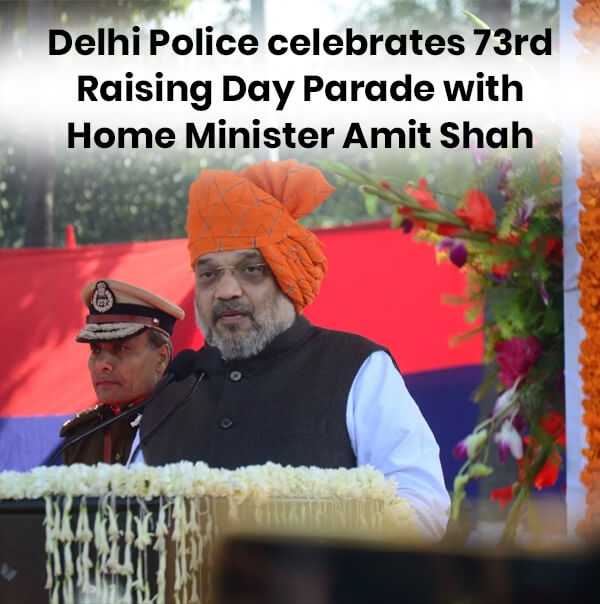 Shah also presented medals to many Delhi Police officers for their meritorious service.

“The legacy of Sardar Patel, who founded Delhi Police, has been held steadfast by Delhi Police on several occasions. In the last 73 years, Delhi Police’s skill, steadfastness and superior policing has ensured the successful organization of several events of national and international importance. That’s a testament to the efficacy and efficiency of Delhi Police”, he said.

Delhi Police is responsible for the safety and security of the Parliament House, Rashtrapati Bhawan, Prime Minister’s residence and the borders of three adjacent states, among other duties.

The annual All India Conference of the Central Administrative Tribunal was held at Vigyan Bhawan, New Delhi on Sunday, Feb 16. The one day conference was attended by Judicial and Administrative Members from all 17 Benches of CAT from across the country, members of the CAT BAR Association, and eminent Jurists, who deliberated on key issue related to the functioning of the Tribunal and priorities for 2020.

Union Minister for Law and Justice, Ravi Shankar presided over the daylong conference. He lauded the CAT for significantly improving the rate at which it was effectively concluding cases, despite a shortage in the number of members on the tribunal.

He also emphasized the need for an in-house judicial impact assessment by CAT. He advised that judicial learning is also very important since the law is in the realm of ambiguity. He emphasised the importance of training in service jurisprudence.

He also highlighted the importance of laying down judgments on service jurisprudence with greater clarity, in view of the government’s commitment towards greater transparency in governance. He assured the help of the IT Department and use of artificial intelligence in the functioning of the Tribunal.

India hosted the 13th Conference of Parties for the Convention on the Conservation of Migratory Species of Wild Animals (CMS), an environmental treaty under the aegis of United Nations Environment Programme, from 17th to 22nd February 2020 at Gandhinagar in Gujarat. 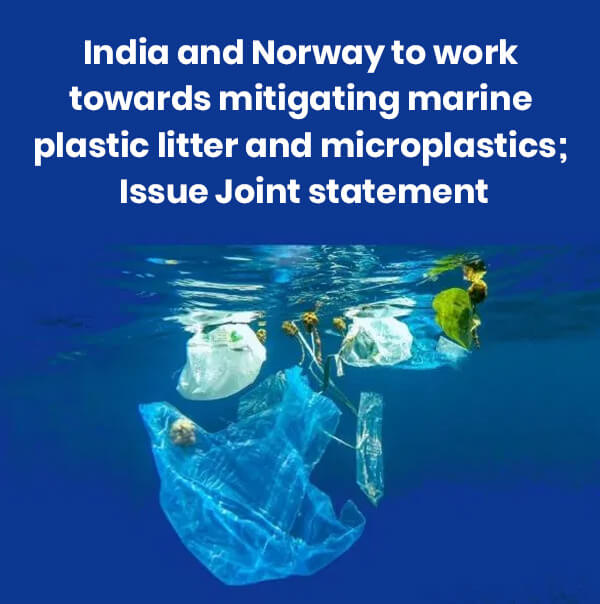 He highlighted the urgency with which we need to work on global environment issues like marine plastic litter, plastic pollution and microplastics, saying that these issues cannot be solved by one country alone.

India and Norway issued a joint statement for bilateral cooperation on the matter. They said that they would work together towards mitigating these plastic-oriented problems.

Kendriya Vidyalaya Sangathan is a set of premier central government schools functioning under the Ministry of Human Resource Development. Being a teac

Your UPSC 2020 preparation strategy should involve the plan for prelims as well as mains. The following topics are included in both prelims and mains

What to Expect in SSC CHSL 2021 Exam? Important Topics with Sample Questions

The SSC CHSL exam is conducted for various posts in the Indian government such as Lower Division Clerk, Postal Assistant/ Sorting Assistant and so on.