Malaysian prime Minister Mahathir Mohamed, 94, has submitted his resignation to the king of Malaysia before the bid by his allies to bring the government down and block his successor Anwar Ibrahim. 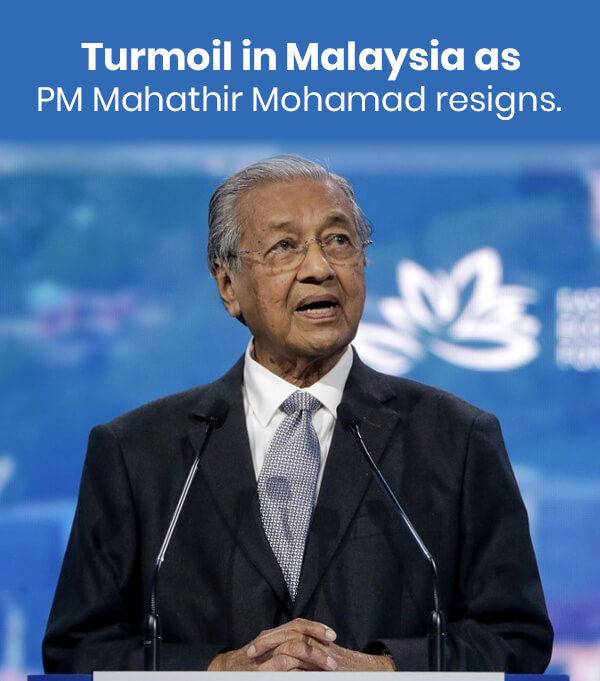 Mahathir Mohamad is the oldest political leader in the world. He was supposed to be succeeded by Anwar Ibrahim, before news of an attempt to bring the government down came out. The current political drama was spread across 24 hours. During this time, Anwar's rivals along with opposition politicians attempted to form a new government.

Anwar and Mahathir themselves did not have any good relations before 2018. They had reconciled ahead of 2018 polls and Mahathir had promised to handover power to his former foe. The duo had teamed up to defeat then government, led by Najib Rajak ,who had been involved in the big 1 MDB graft scandal.

Rajak’s ruling coalition had ruled Malaysia for 6 decades without any interruption and the alliance between Mahathir and Anwar had an unexpected victory against this coalition. It was then that Mahathir promised Anwar to hand over power to him but has repeatedly refused to fix a date.

US president Donald Trump praised Prime Minister Narendra Modi and called him his "true friend" at the Namaste Trump. The American leader, who is currently on a two-day visit to India, also praised the PM for his rise from being a tea seller to the leader of such a big democracy. 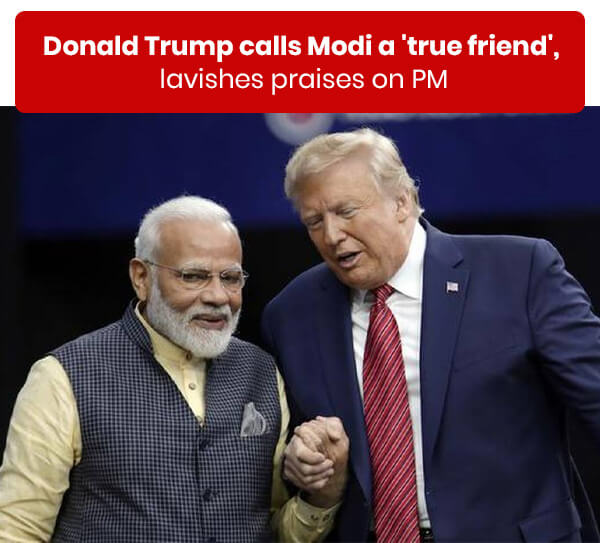 Trump had showered praises on Prime Minister Modi during his speech at the public event held at Motera stadium Ahmedabad, addressing a crowd of 1 lakh people. His words reflect the strong friendship between the two leaders.

Mr.Trump was accompanied by his family including first lady Melania Trump, daughter Ivanka and son-in-law Jared Kushner, both senior advisors to the president.

He called India as a giant economy which had lifted 270 million people out of poverty in a single decade. Comparing India to China, he described China as a country that claims its powers through coercion, intimidation and aggression while India is growing by setting its people free and letting them chase their dreams.

During this presidential visit, the two countries are expected to seal defence deals worth $3 billion on February 25. The president has also expressed interest in space exploration by the US space agency and its Indian counterpart.

3. Policeman among 5 killed in Delhi violence over CAA.

Anti-CAA and pro-CAA protests in the capital city of Delhi have taken an ugly turn, when violence broke out between the two factions in Northeast Delhi. The violence coincided with President’s Trump arrival in the country. A head constable and 4 others died in the skirmishes, while 75 others were seriously injured in the incident. The two groups had clashed with each other, pelting stones on Feb 24 morning.

Areas like Brahmpur, Maujpur and Jafrabad in Delhi continued to remain tense as fresh incidents of stone pelting took place here. Among those injured, 11 personnel are from Delhi police which includes even DCP and ACP of the respective jurisdiction. They got injured while they were trying to quell the protest. 2 CRPF personnel were also critically injured in the violence.

Section 144 has already been imposed in the area. The tensions simmered in the area after hundreds of anti CAA protestors which included mostly women blocked the road near Jafrabad station. LG has given orders to the police commissioner to maintain peace in the capital region ahead of President Donald Trump's visit.

The National Investigation Agency (NIA) has revealed that the 13 Indian Navy personnel, who had been arrested on espionage charges, had leaCked highly sensitive information to Pakistan Intelligence Operatives (PIOs). 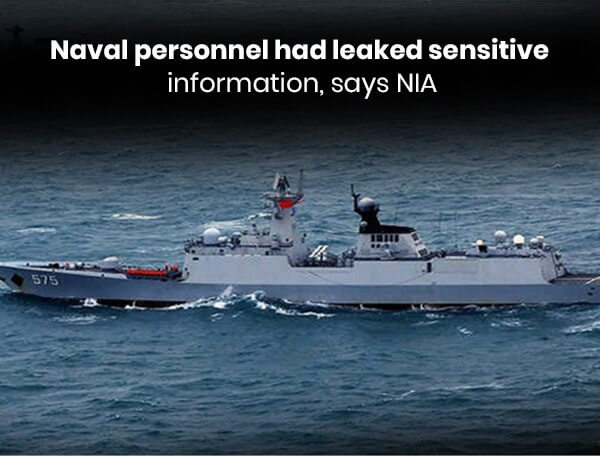 The NIA had arrested these sailors in a joint operation (Operation Dolphin Nose) with Naval intelligence and Counter Intelligence of Andhra Pradesh across many states and naval bases.

In its investigation, the NIA has found that large amounts of money were transferred to the bank accounts of the Navy personnel who had passed on crucial information. The agency is now quizzing the banks on why these suspicious transactions were not flagged when they had happened.

As per the agency, the 13 had revealed names of ships and submarines, top level officers, routes they operate, details of other colleagues recruited recently from various naval bases. They also disclosed about some vital locations, movements of warships and submarines.

The two Supreme Court-appointed interlocutors Sanjay Hegde and Sadhana Ramachandran on Monday handed over a report of their four-day efforts to coax Shaheen Bagh protesters to shift their agitation against the CAA to an alternative site. A Bench of Justices Sanjay Kishan Kaul and K.M. Joseph took the report in the courtroom. 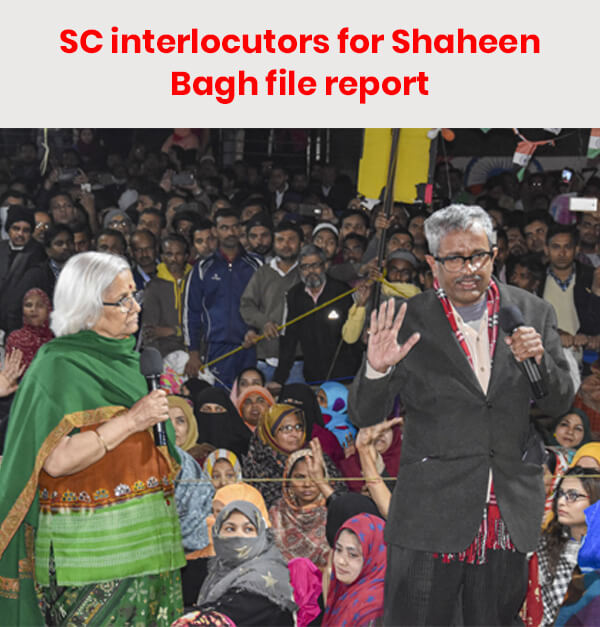 The Supreme Court has not spoken either for or against the Citizenship Amendment Act so far. They have only spoken about hearing all sides and all voices in the matter. They have also commented on the public inconvenience as the protesters continued a sit-in on the site.

No comments have been made on the details of the sealed report, though the bench has listed the matter for hearing on Wednesday. The court has also refused to share a copy of the report with Amit Sahni, the advocate for the petitioners.

“We are not even putting it [report] on record... Let’s go through it first,” Justice Kaul said.

The Ministry of Home Affairs has notified provisions in the Arms Act 1959 and the Arms Rules 2016, which allow shooters to have more firearms and ammunition for practice. The idea here is to promote the development of shooting as a continued Olympic medal-worthy sport in India. 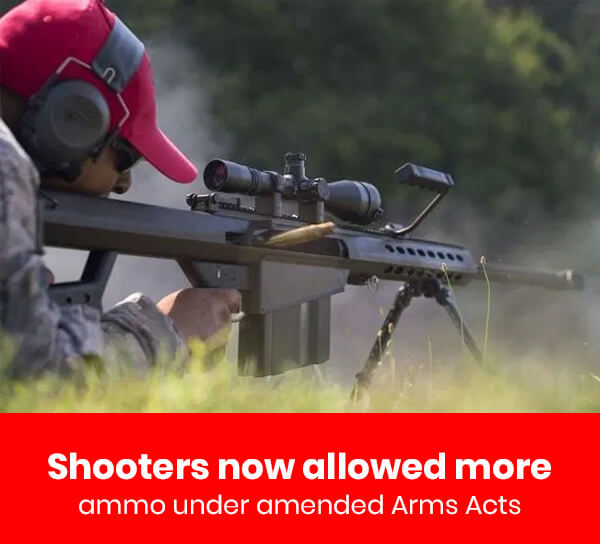 The change in law raises the number of firearms shooters can keep for the practice in a year based on their performance levels. International level shooters, medallists and renowned shooters can keep upto 12 under the exempted category - this number has risen from 7.

Shooters who have developed their mettle in a single event, can keep a maximum 8 (against the previous 4) firearms. Junior target shooters or aspiring shooters are now allowed to possess two weapons (against 1 earlier) for any chosen category.

They are also now entitled to possess 2 firearms as normal citizens under the Arms Act.

The Competition Commission of India has approved the bid from National Thermal Power Corporation (NTPC) to acquire significant shares of THDC India under section 31(1) of the Competition Act 2002.

NTPC, a Maharatna company has significant stake in India’s power generation business. This it does primarily with thermal power plants, though it does generate some electricity from hydro and renewable energy resources. 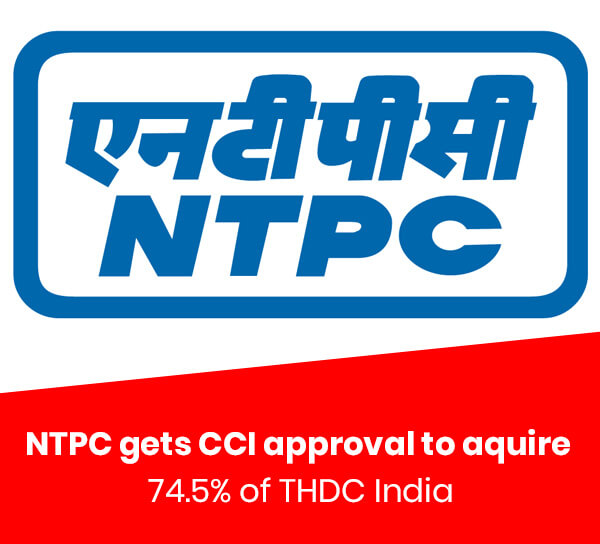 Meanwhile, THDC is a government company held jointly between the Central government and UP government. A mini-Ratna enterprise, THDC governs Tehri hydro power projects and a few others under its hold. The acquisition by PSU NTPC will amplify the latter’s hydro power generation capabilities.

Home minister Ramesh Pokhriyal awarded six technical institutes and 23 teams with honours for technical education at the Chatra Vishwakarma awards held in New Delhi. The All India Council for Technical Education had organised the Vishwakarma Awards for 2019. 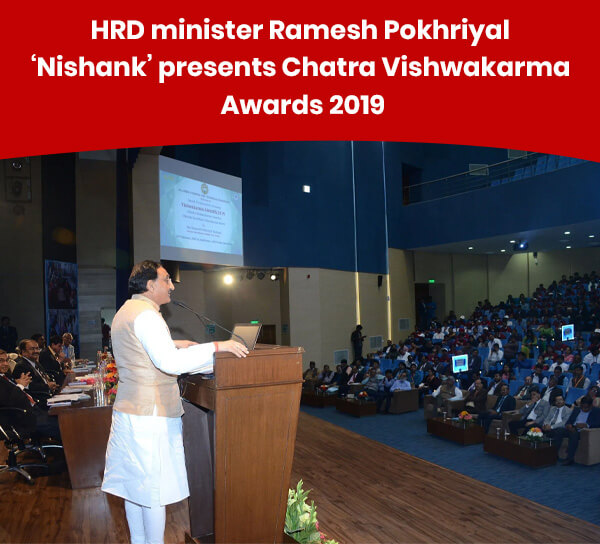 The minister congratulated the awardees at the event. He said, "I got to know that among 6676 teams, 117 teams were selected for the final and among them 23 teams got the awards in different categories, this shows that India has lots of talent".

AICTE has been organising Vishwakarma Awards since 2017 in a bid to promote innovative spirit and scientific temperament for holistic development of society through the stakeholders of its approved institutes. The Awards are aimed at motivating young individuals, inspiring leaders and institutions/ organizations to raise their performance in their specific domains leading to significant contribution towards the growth and development of the Nation as a whole. 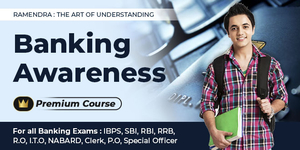 7th December observed as a Army Flag Day... This is observed to remember the Army,Navy and Air-force Personal who have sacrificed their lives for

1.Supreme Court upholds changes to SC/ST atrocities law The Supreme court has upheld an amendment to the Scheduled Castes and Scheduled Trib

The Railway Recruitment Board has not released the RRB NTPC 2020 exam date till now. Aspirants need to wait for some more time to get the informati

MPPSC 2020 exams are coming soon, and students are preparing to the best of their knowledge. If you are also a student who is preparing for clearing M