As the SSC CGL 2020 is only about 1 month away, here I am providing the answers of previous year SSC CGL General Awareness paper with a supportive explanation to help the SSC CGL aspirants in their last-minute preparation. All the aspirants must understand that the syllabus of the General Awareness section is the combination of both static and dynamic topics and thus need a distinct strategy. Here the questions are asked on the basis of facts. So your only savior here will be practice through last year’s question paper and mock tests. Here find the questions wise paper analysis: 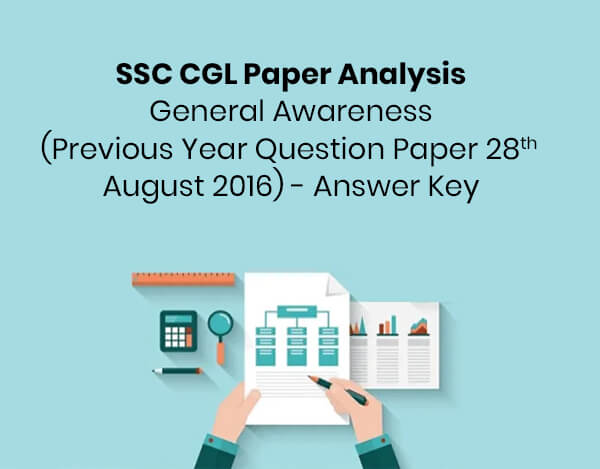 a. Internet Service Providers and governments should treat all data on the internet equally

b. Piracy in internet must be curbed

c. Internet users must give out balanced opinions in social media sites

d. Internet should be kept free from malware and virus

Explanation: ‘Net neutrality’ is the concept which says Internet Service Providers and the government should treat all data on the internet equally. It is a way to restrict the favoritism of internet service providers on the basis of type of content, different applications, websites, etc.

2. Excise duty is levied on

a. sale of goods

b. production of goods

3. Golden Revolution in India refers to growth of:

a. Militancy in the northeast.

Explanation: Golden Revolution in India refers to the program which was implemented to boost the growth in the field of production of honey and horticulture between 1991 to 2003.

4. Water is used in a hot water bag because

a. It is easily available

b. It has high specific gravity

c. It has high specific heat

d. It is a liquid substance

5. What is the meaning of "Public Interest Litigation"?

a. Anything of public interest

b. A case brought by victim to court, involving public interest.

c. A case brought by anyone to court involving public interest.

Explanation: “Public Interest Litigation” is a judicial term to refer a particular case related to the matter of public interest in the court of law by anyone. It is a term mostly relate to the Judicial activism.

6. Who referred to Mahatma Gandhi as "Father of the Nation" for the first time?

Explanation: Subhash Chandra Bose is the right answer. Subhas Chandra Bose for the first time referred Gandhiji as “Father of the Nation” or “Rashtrapita” in a radio telecast from Singapore during an address to the nation in 1944.

7. Which title, given by the British Government to Mahatma Gandhi, was surrendered during the non- cooperation movement?

Explanation: “Kaiser-e-Hind” is the right answer. It was the title given to Mahatma Gandhi by the British Government which was surrendered by him during the non-cooperation movement.

Explanation: 0° C is the right answer. The conversion formula from temperature to Celsius scale will be:

9. The point where total mass of a body is supposed to be concentrated is known as

b. Center of mass

Explanation: The center of mass is the point where the total mass of a body is supposed to be concentrated. It is a relative position of an object.

10. Which part of brain is also known as "little brain"?

11. Which organism is responsible for alcohol fermentation?

Explanation: Yeast is the right answer. It is the one that is responsible to initiate the biological process of fermentation which results in the form of alcohol, CO2 and energy as a by-product.

12. Which of the following groups of rivers have their source of origin in Tibet?

13. The ideal region for the cultivation of cotton in India is

a. The Brahmaputra Valley

b. The Deccan Plateau

d. The Rann of Kutch

Explanation: The Deccan Plateau is the right answer. The ideal region for cotton cultivation requires the presence of black soil which is mostly found in the Deccan Plateau of India. This area is situated between the Eastern Ghats and Western Ghats.

14. Where do the electrical charges reside in a charged conductor?

a. at the core

b. throughout the body

c. depended upon the nature of the body

d. outer surface of the body

Explanation: The electric charges in a charged conductor reside on the outer surface of the body of the conductor to be far from each other according to Coulomb's law.

15. The color of the ocean appears to be blue because the sunlight falling on it is

16. In which mode can the computers that are associated send frames directly to each other?

Explanation: Adhoc mode is the right answer. In the wireless network connections, computers connected through the Adhoc mode can send frames directly to each other. In this mode, the communication among computers or devices takes place without an access point.

a. The discontentment of the soldier’s

b. The use of greased cartridges in the new Enfield rifle

c. The social conditions of India

d. The introduction of railways and telegraphs

Explanation: The immediate cause of the mutiny of 1857 was the use of greased cartridges in the new Enfield rifle by the sepoys. It was circulated that these cartridges are made from beef and pork which created some religious discontent within the sepoys as it was required to cut the cartridges from the mouth to open them for use.

18. Who introduced the "Doctrine of Lapse" to expand British territories in India?

Explanation: The Lord Dalhousie, the Governor-General from 1848-1856 has introduced the “Doctrine of Lapse” as the annexation policy of East India Company to expand the British territories in India.

a. Education of girl child

b. Development of smart cities

Explanation: HRIDAY( National Heritage City Development and Augmentation Yojna) scheme has been launched by the Urban Development Ministry with the aim of the development of heritage sites so that its heritage character can be conserved along with urban planning.

20. Global warming is expected to result in

a. Increase in sea level

b. Change in crop pattern

d. All of these

Explanation: As a result of Global Warming the ice on the poles is melting because of this the sea level is continuously rising which is changing the coast lines and thus affecting the crop pattern.

21. Who appoints and dismisses the gazetted officials of the Union Government?

a. The President of India

b. The Prime Minister of India

c. The Home Minister of India

d. The Finance Minister of India

Explanation: All the appointments and dismissal of the gazette officials of the Union Government takes place under the seal of the President of India.

22. The industry having the largest investment in Indian Economy is.

Explanation: The steel industry is having the largest investment in Indian Economy. The National Steel Policy implemented by the government in 2017 is giving a boost to this sector and to achieve global milestones in the coming years.

23.Ajanta Ellora Caves are situated near which of the following cities?

24. Which of the following is a name of US Parliament?

Explanation: The Bi- Cameral US Parliament is known with the name Congress. In Congress there are two chambers are present namely the ‘House of Representatives’ and the ‘Senate’.

25. Charles Correa is a renowned Indian

Explanation: Charles Correa is a renowned Indian Architect and urban Planner of independent India. He is famous for implementing his modern urban planning ideas by using the methods which require old age materials for building structures.

All The Best To All The SSC CGL Aspirants !